Our hotel offers 12, non bookable, parking places, the access is over the "Jakob-Rausch-Staße 3".
Buchen

are still under reconstruction and therefore not yet bookable.

Information around around your stay in Ahrweiler and our Ahr Valley

Ask yourself: Can we go on holiday in the Ahr valley at all after the flood of Juli 14th\15th 2021 and the great destruction? Am I wanted as a guest there "Yes!" We AHR open! We are far from finished but open and happy about your visit! 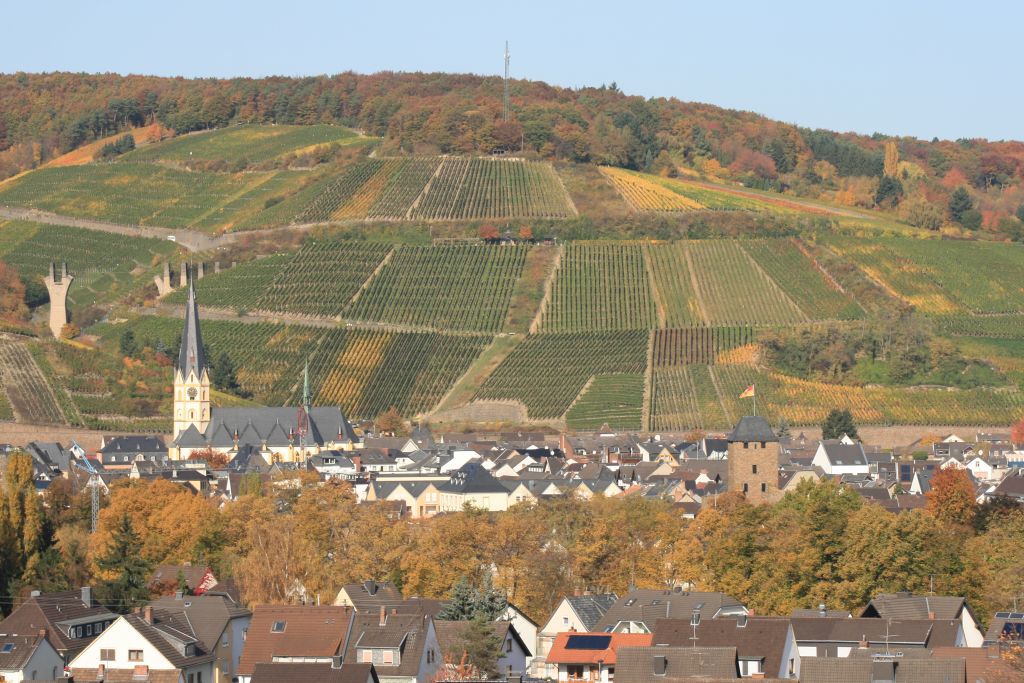 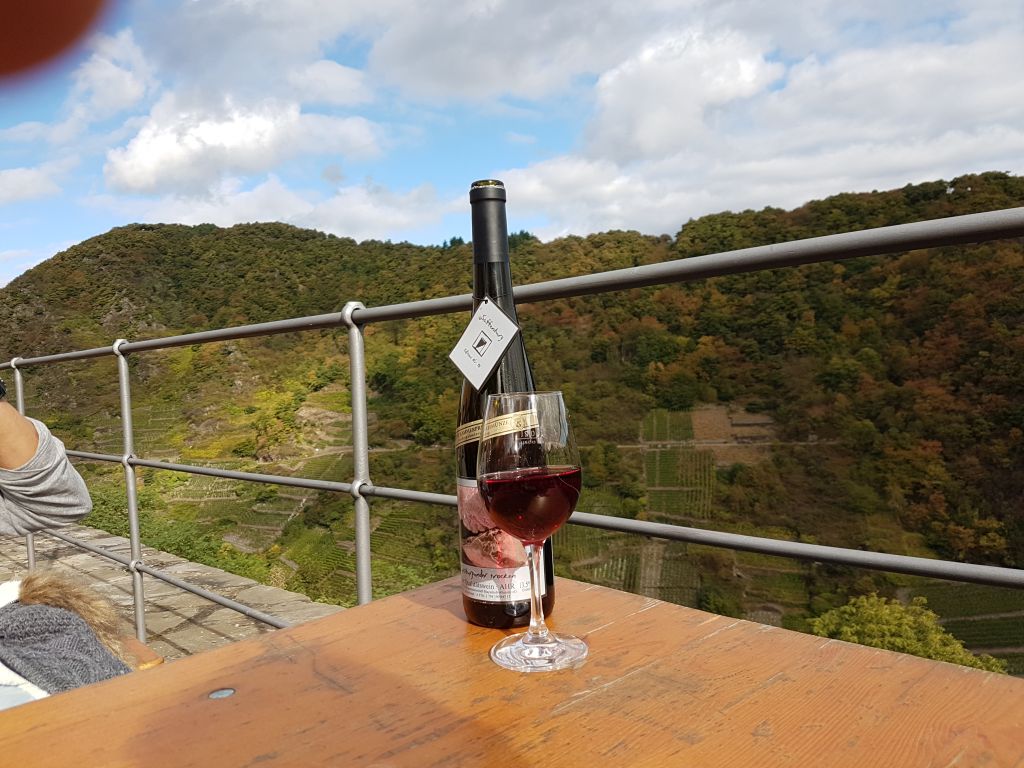 Burgruine Saffenburg with a view of the red wine trail 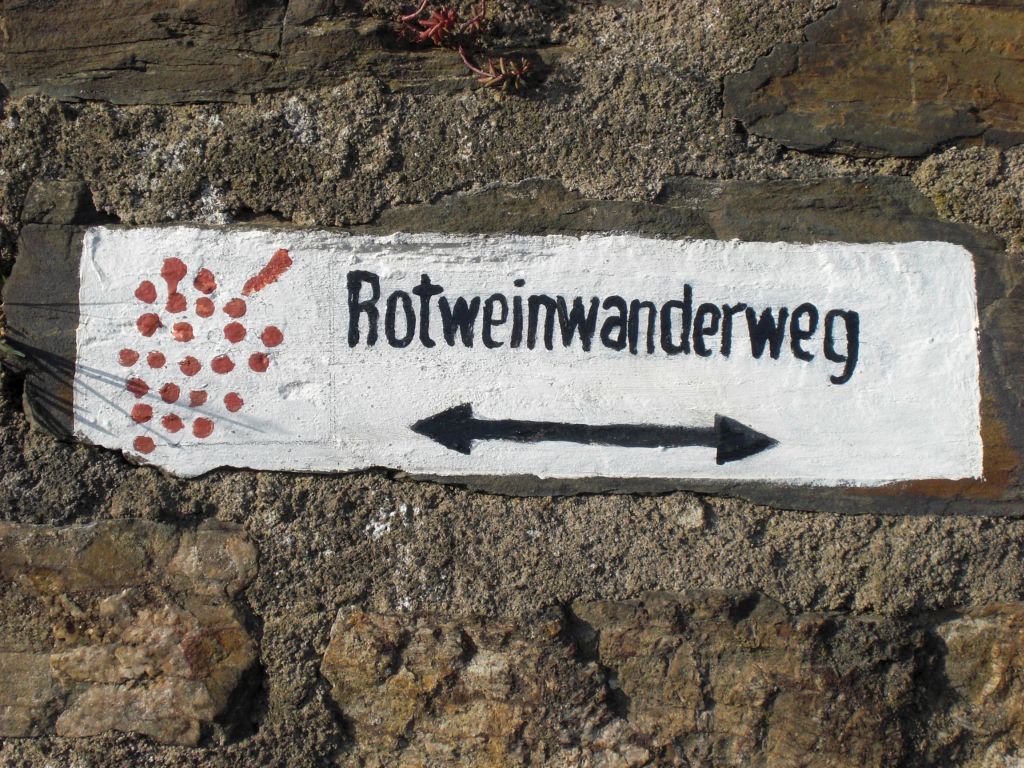 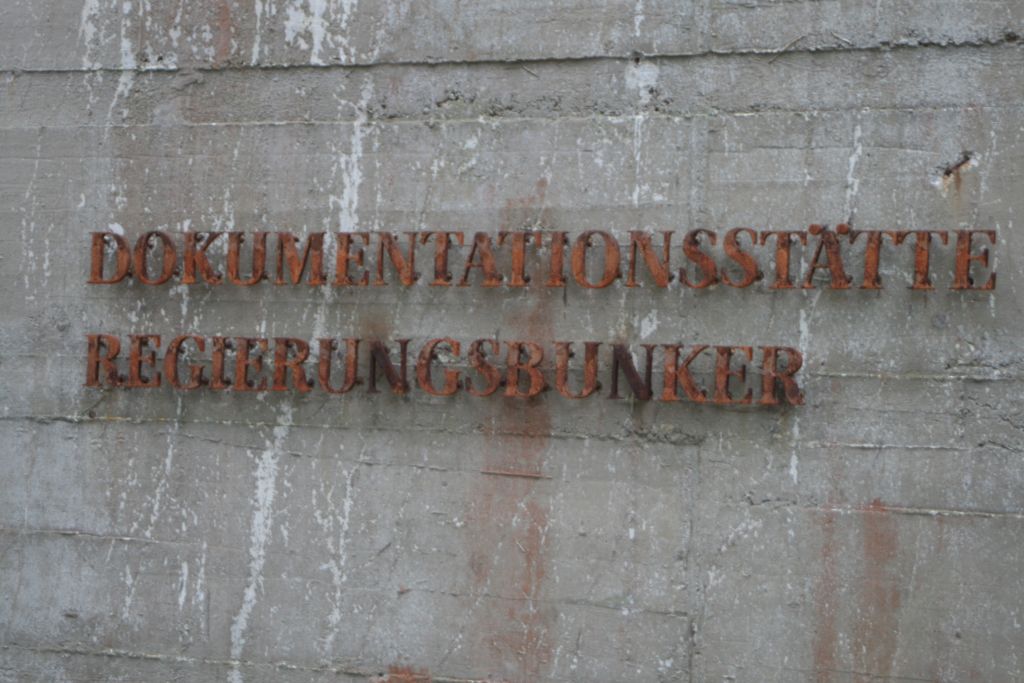 Autumn in the vineyards 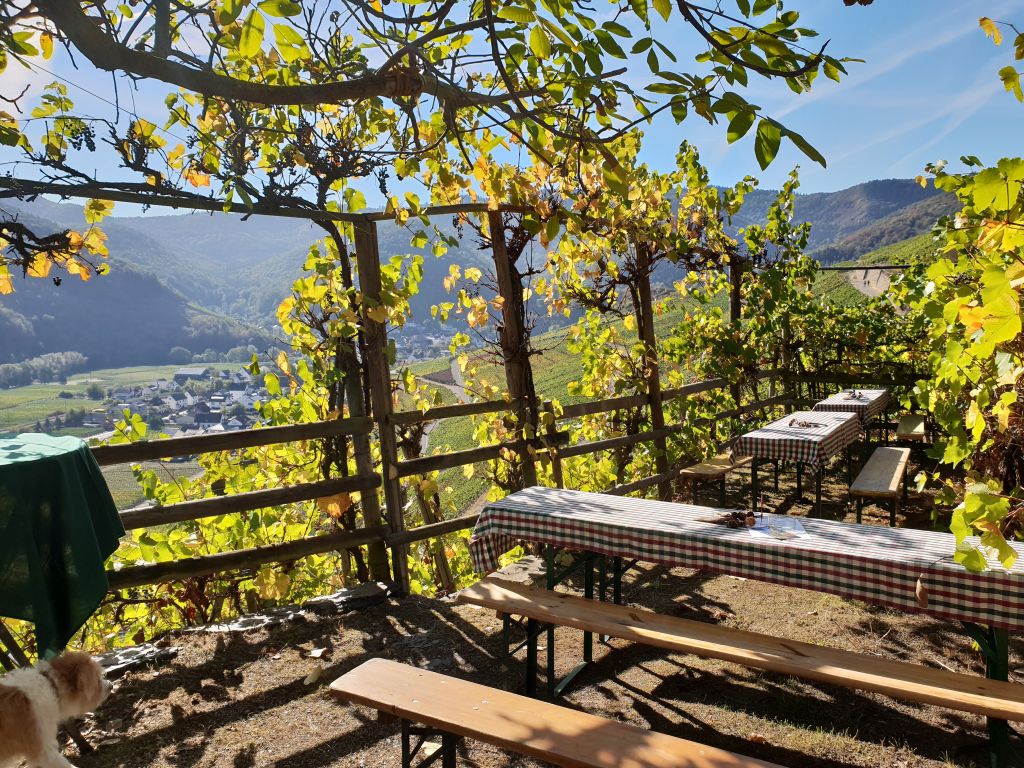 Stop on the red wine trail 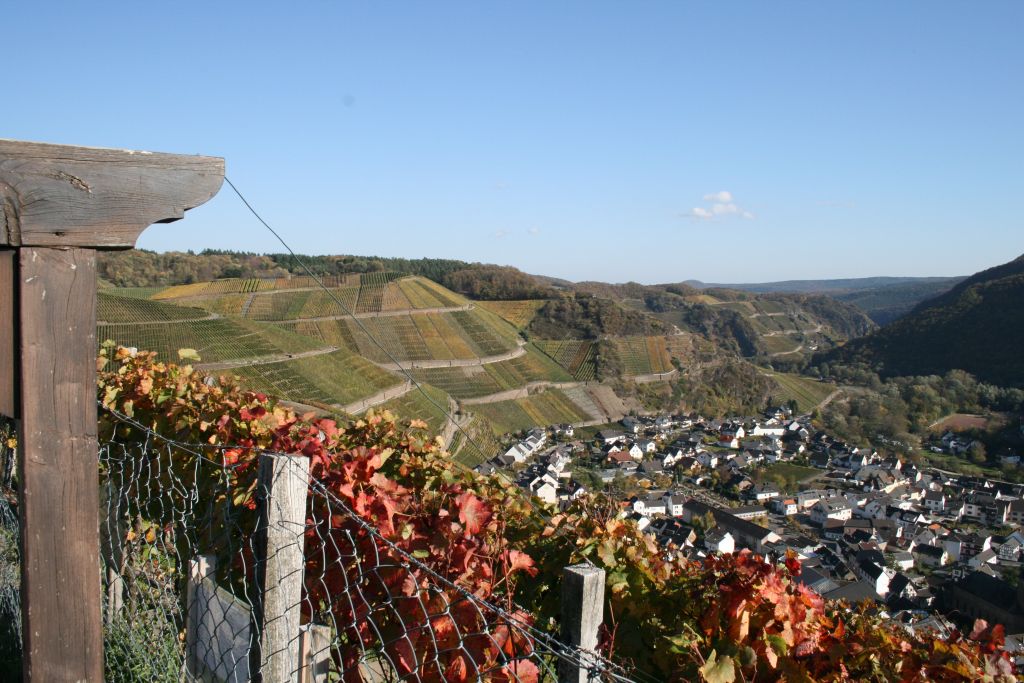 Starting point for a variety of activities

Ahrweiler is the ideal point of departure for your stay in the Ahrtal valley. The ‘Rotweinwanderweg’ (Red Wine hiking trail) and the ‘Ahrsteig’ invite hikers, the ‘Ahrradweg’ attracts bikers. But there is much more to discover besides the popular trails. We are happy to help you plan your perfect trip.

On the one hand: Ahrweiler, the medieval red wine capital with its fully preserved city wall from the 13th century, including four equally well-preserved gates. Its charm is intensified through the many cafés, wine bars and stores winding through the city, inviting you to take strolls. On the other hand: Bad Neuenahr, which shines through its wellness opportunities and the casino, which is reopening in the summer of 2023.

TBoth parts are surrounded by vinyards and woods. The perfect place to relax while reconnecting with nature.

The so-called ‚Valley of the red grape’ offers a variety of possibilities for those seeking relaxation to arrange their stay according to their wishes. Historically, the city also has a lot to offer: the Roman villa and and government bunker are the perfect places to spend a rainy day and learn interesting facts about the town’s past.

Hiking trails for (almost) everyone!

Whether it’s a small walk through the old town or an elaborate tour over the course of days: there are lots of possibilities to hike through our beautiful valley. We are happy to help you find the right trail for your needs and wishes.

For tours lasting several days, we are happy to help you find the connecting accommodation. We will gladly organize the luggage transport for you.

For most guests it’s a must-do when they are visiting: the Rotweinwanderweg (engl. Red wine hiking trail). On trails with a length of approx. 35 km, hikers are rewarded with magnificent views, small winegrowing villages and cozy wineries. For more information on the red wine trail, visit www.Rotweinwanderweg.de

The Ahrsteig is of great interest to more ambitious of hikers. Along this trail, you can expect to encounter a few more meters of altitude to overcome. The trail commences in Sinzig, traversing through beautiful landscapes before culminating in Blankenheim, predominantly following the southern banks of the river Ahr. The trail spans an approximate distance of 100km.

This educational trail Weinbaulehrpfad about winegrowing starts at the Adenbachtor, about 500m away from our hotel. The trail length is 7km and the estimated duration of the hike is around 3 hours. Along the trail, there are several opportunities to take breaks and enjoy a drink, such as in the vineyard located at the Hohenzollern Hotel restaurant or in Walporzheim at Vinetum.

The Maibachklämmche is a small and idyllic trail next to the Kalvarienberg monastery. Hiking through 11 small wooden bridges, you can explore a section of the Ahrsteig trail. Unfortunately, it is currently difficult to access due to missing bridges. Please do not hesitate to ask us, whether it is accessible when you visit.

It doesn't always have to be a track tour, here you can find beautiful round trips

Footpath to Bad Neuenahr or by the Bimmelbähnchen (return).

A nice alternative if you don't want to hike uphill is the Ahruferweg to Bad Neuenahr. 4km along the Ahr.

These quality promises are just an excerpt of the criteria that we fulfill as a quality host of Hikeable Germany. Feel free to ask us.

Mountain bikers can also discover diverse trails in and around Ahrweiler. Please note the limitations due to the flood catastrophe and the ongoing reconstruction. For more information, visit Ahrradweg.
Bicycles can be securely stored with us during reception hours.

Mountain bikers can also discover diverse trails in and around Ahrweiler. Please note the limitations due to the flood catastrophe

Approximately 500 meters away is the bike rental https://www.basislager.comA reservation is recommended.

A good Ahr wine also requires good food. Bad Neuenahr-Ahrweiler offers guests a wide range of restaurants, from casual taverns and wine bars to a diverse selection of restaurants, to Michelin-starred establishments. There is a restaurant to suit every taste and budget.

DThe restaurants listed here are within walking distance of the hotel. As a hotel garni, we do not have our own restaurant, but we are happy to assist you in your selection.

Ahrweiler and the Ahr Valley are known for their red wine, making wine tastings nearly imperative. For groups of approximately 14 people or more, we recommend a wine tasting directly at a winery. A reservation is advisable

. Discovering Ahr wine can be done in various ways, the simplest way is to enjoy a glass or two in one of the many local establishments. However, for those who want to learn more about the wine and its diversity, a wine tasting is recommended. Some wineries offer open tastings, which are ideal for small groups or even just two people. In general, these tastings can be attended without prior registration.

Please note that most events are not offered throughout the year, they typically take place from the beginning of May to the end of October.

Near the hotel is the "International Wine Instiute"which not only trains sommeliers but also offers interesting seminars for wine enthusiasts.

dLINKS THAT MAY INTEREST YOU

Ahrtaltourismus is our local tourist information center. They will assist you in planning your holiday in the Ahr Valley.

Directly outside your doorstep, you will find one of Germany's most scenic hiking trails, the "Red Wine Hiking Trail". On the website Rotweinwnaderweg.de you can find everything about the Red Wine Hiking Trail, as well as information about gastronomy and culture in the Ahr Valley. The trail starts in Bad Bodendorf and ends after 35km in Altenahr. It passes through the wine-growing region, past wineries, taverns, and offers diverse views of the Ahr Valley.

What would the Ahr Valley be without its red wine? The red wine paradise of Germany. On the website www.ahrwein.de you will find everything about Ahr wine.

The new Ahr bike and hike trail from mouth to source. 90 family-friendly kilometers from the estuary of the Ahr river in Sinzig to its source in Blankenheim. Passing by the "Wild Daughter of the Rhine" on a dedicated bike path.
Please note the limitations due to the flood catastrophe and the ongoing reconstruction. For more information, visit Ahrradweg.

The Government Bunker opened its doors on March 1, 2008. The 'bunker' is a piece of history of the Federal Republic of Germany. In case of war, this nuclear bomb-proof bunker was intended to serve as a safe haven for the political leadership of our country.

The Roman Villa was discovered during the construction of a bypass road in 1980. It consists of rooms of a gentleman's house from the 2nd to 3rd century AD. The preservation condition of the Roman Villa is considered to be very good. Since May 1993, the Roman Villa has been open to visitors as a museum.

Öffentliche Verkehrsmittel The Ahrtalbahn is an essential mode of transportation for hikers, running from Remagen to Ahrbrück and stopping at all important towns along the Red Wine Hiking Trail. It brings hikers to and from their hiking destinations. For some routes, such as the Ahrsteig, there are also bus connections. Currently, there is a replacement bus service in place from the Walporzheim stop while the rebuilding of the track is planned to be completed by the end of 2025.

The Ahrtal Express runs hourly between Bad Neuenahr (Kurgartenbrücke) and the market in Ahrweiler. During the ride, passengers learn about the history, economy, and winemaking of the city of Bad Neuenahr-Ahrweiler.

The Spielbank Bad Neuenahr, located in its Art Nouveau building, was considered one of the most beautiful casinos in Germany. Unfortunately, the damages of the flood make a reopening in its old glory difficult. Therefore, the new Spielbank is being opened in summer of 2023 in the train station Bad Neuenahr. Perhaps you would like to test your luck.

For those who can't go without an adrenaline rush, the forest climbing park in Neuenahr offers a fun climbing experience with many challenges set in the forest.
This website uses cookies to provide the best possible functionality. We do not use analytics or advertising cookies. The online booking is provided by DIRS21, there you will be separately on their Data protection­regulations pointed out or your consent is obtained there. More Information hier